A family of neurodegenerative disorders known as frontotemporal lobar degeneration (FTLD) spectrum disorders includes FTLD, ALS, progressive supranuclear palsy (PSP) and corticobasal degeneration (CBD). From clinical and pathological points of view, these disorders have distinct features. For instance, ALS and PSP show quite different clinical symptoms, and thus they were considered to have different pathological backgrounds.

We have recently shown that these neurodegenerative disorders have more in common than previously thought. We studied the interaction between fused in sarcoma (FUS) and splicing factor, proline- and glutamine-rich (SFPQ) — in brain autopsy samples from over 100 deceased individuals with various FTLD spectrum disorders and in control samples.

Our results showed that there is potentially a common pathomechanism among FTLD spectrum disorders, even between ALS and PSP. This aberrant interaction leads to an imbalance of tau protein variants, which has been implicated in a wide range of neurodegenerative disorders. In contrast, the interaction between FUS and SFPQ produces a functional balance of tau isoforms in healthy individuals (Ishigaki et al., Brain 2020). We have also demonstrated that altered interactions between SFPQ and FUS were observed in the motor neurons in PSP, CBD, and ALS but not in other neurodegenerative disorders. These results suggest that PSP and CBD may share features of motor neuron disease as well (Riku et al., Brain 2022).

Based on those findings we are designing a treatment strategy for FTLD spectrum diseases that could target the factors involved in the process. 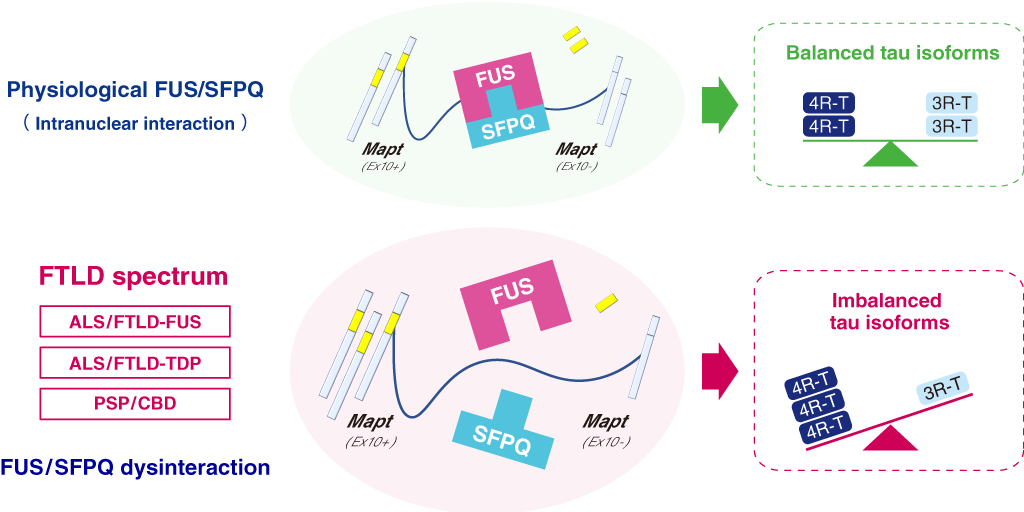